Festivals often seem intended to test one’s endurance. Multiple stages demand that choices be made, oftentimes at the expense of missing one artist in order to see another. Dragging one’s self the distance between far flung venues drains both time and energy while often depleting the ability to fully enjoy any performance one takes extra pains to see. An overwhelming number of artists can make the prospect for taking it all seem somewhat daunting, a task best accomplished only by those with the strength and stamina to strategize most effectively.

If that seems an unlikely set-up for a festival review, then suffice it to say the Suwannee Roots Festival wholly lacks any challenge entirely, It is remarkably manageable for the most part, four days of peace and love in the most mellow of settings. If that bears a certain Woodstock-ian reference, then so be it. With the abundance of tie dye, good vibes and a serene setting to boot (one particular pathway in the park is actually dubbed “Hippie Way”), the similarities are all too obvious. Granted, there’s no mud or skinny dipping -- at least from what could be observed from the premises -- but as an escape from the toilsome world that was frequently referenced by the artists onstage, it’s nothing less than a wonderful respite. 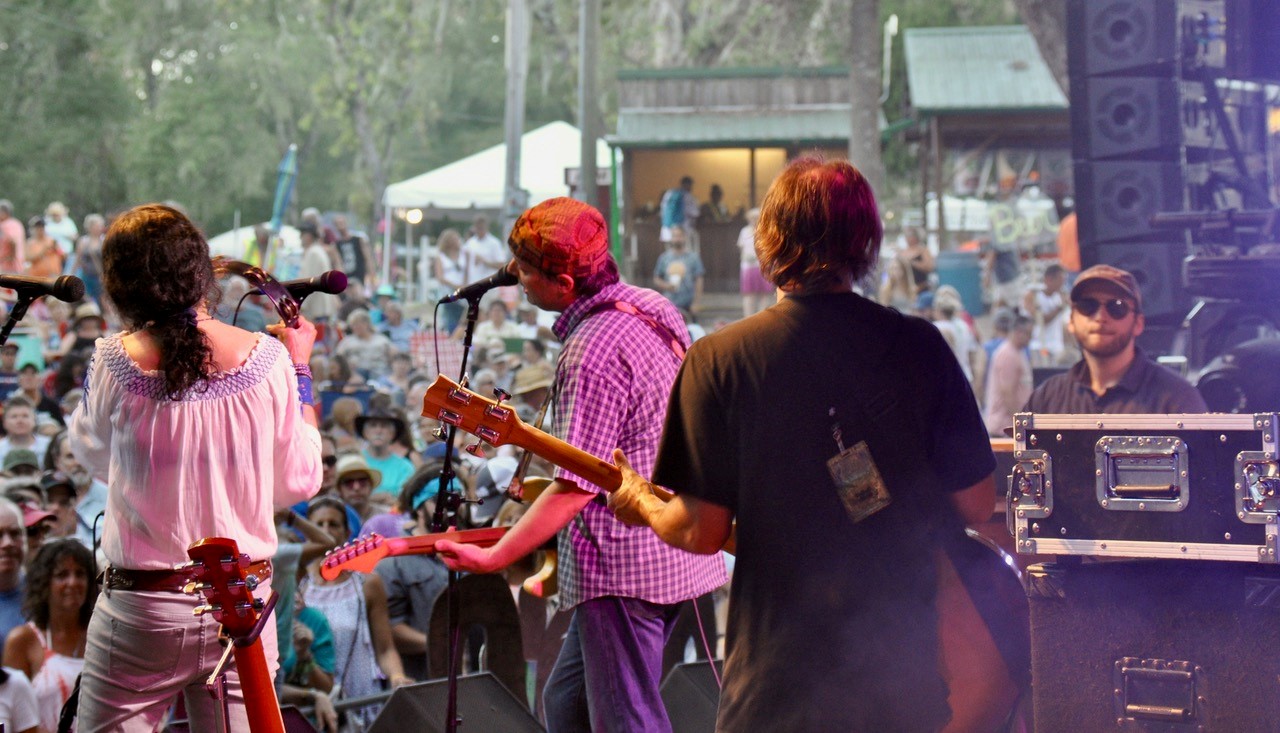 Donna The Buffalo at the 2017 Suwannee Roots Revival

There are several scenarios that make this so. For one thing, the line-up was superb. Donna the Buffalo, the Steep Canyon Rangers, Jim Lauderdale, Amanda Platt and the Honeycutters, Bela Fleck and Abigail Washburn, the Wood Brothers, Peter Rowan (with Jack Casady, no less), Chatham County Line, Seth Walker, Verlon Thompson, Shawn Camp and, umm, Mother’s Finest topped the line-up. Many of them had played the fest before. And all were entertaining and appealing, albeit in different ways.

For starters, several of the artists -- including Donna the Buffalo which has been coming to Suwannee gatherings every year since the beginning -- were clearly festival favorites, offering enticement from the outset. In addition, the setting is ideal, with broad sweeps of open fields, sleepy oaks draped in hanging moss, and a natural sloping amphitheater that adds ambiance entirely on its own. Three stages and an assortment of side venues, workshops and intimate environs provide added attraction. Likewise, a variety of vendors selling a variety of foods, crafts and clothing add to the homespun circumstance. It’s easy and unhurried, as befitting the ability to enjoy the down home designs and a laid back listening experience.

Of course, it’s always the music that matters. The Donnas entertained in a variety of venues, from their own main stage appearances to informal evenings in the campgrounds and up to the final send off. Their performance with Jim Lauderdale (who also entertained and amused on his own) was a particular treat, an upbeat bill that found Lauderdale leaping about like a rock star unburdened. The Steep Canyon Rangers performed twice, giving them opportunity to showcase both newer material that’s slated to be included on an album due out in January and their current project with Steve Martin, The Long Awaited Album, as well as a selection of familiar favorites from past projects. However, the most tender moment of the gathering belonged to Shawn Camp and Vernon Thompson who offered a combined tribute to the late lamented Guy Clark, sharing music and thoughts about the man who they both had backed with continuing consistency up until his death last year.