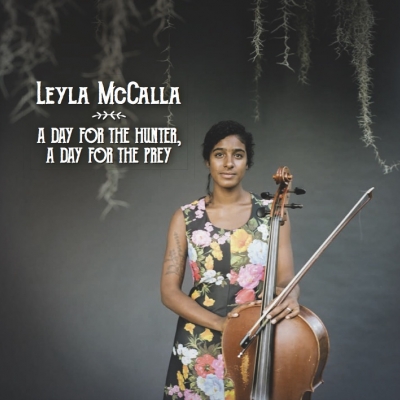 The band Carolina Chocolate Drops seems to have become a launching point for a number of talented musicians of late. So it’s little surprise to find one of its key players, Leyla McCalla, following in the footsteps of her ex bandmates Rhiannon Giddens and Dom Flemons and striking out on her own. Not that she doesn’t have support; Giddens, along with Marc Ribot, McCalla’s husband Daniel Trembay and Louis Michot of the Lost Bayou Ramblers are among those in the attendance who help ensure McCalla’s launch is as successful as it can be.

Still, for all that outside assistance, McCalla herself is the one that deserves credit for making “A Day for the Hunter, A Day for the Prey” as interesting as it is. A diverse collection of songs that combines striking originals with traditional tunes culled from Haitian, Cajun and Creole culture, it comes across sounding like folk music with a particularly arcane approach. A multi-instrumentalist to a great degree, she leans especially heavily on cello and plays it with a decidedly deft touch. Nevertheless, these are mostly bare bone arrangements that bely the number of additional musicians that are fully involved. Indeed, the album could easily have come across as heavy handed, and yet songs such as the title track, “Les Flats Sont Tous Mis Sur La Table,” “Manman” and “Salamgadou” are supple and spare, a series of quiet passages sung in a variety of different tongues. To be sure, “A Day for the Hunter, A Day for the Prey” has its uptempo offerings as well - the jaunty gypsy tune “Far From Your Web,” the zydeco sounding “Bluerunner” and the pluck and twinkle “Let It Fall” among them. Ultimately though, this is a singular statement from an artist who’s clearly ready to stand in her own singular spotlight.