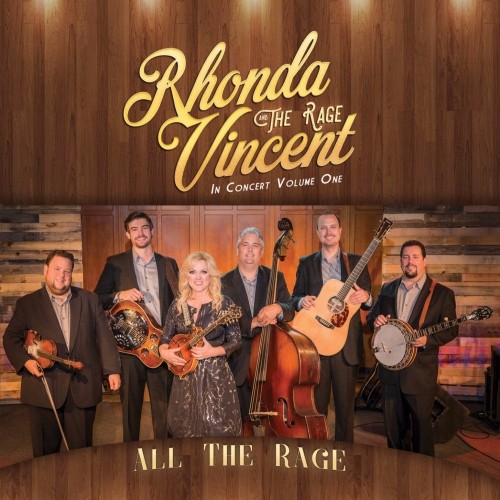 It would be hard to imagine a band more adept at authenticity as far as bluegrass is concerned than Rhonda Vincent and The Rage. While Alisons Brown and Krauss may be better known, and therefore given more opportunity to seize the spotlight, Vincent and her band continue to plow the roots of vintage Americana, opting to serve up nothing more distinctive than their verve and vitality. For those who are unfamiliar with the band’s backstory, All the Rage/In Concert Volume One is an ideal introduction, a crash course in the traditional tack taken by Vincent and her superb backing band. While Vincent occupies the spotlight on vocals and mandolin, the sheer skill and dexterity exhibited by Hunter Berry on fiddle, Brent Burke on resophonic guitar, Aaron David on banjo, guitarist Josh Williams and bassist Mickey Harris is simply remarkable to witness. Regardless of whether they’re launching a full speed assault on standards like “Muleskinner Blues,” revving up a frantic fiddle tune like “Wow Baby,” or settling in with a breezy respite through such self descriptive songs as “Is The Grass Any Bluer (On the Other Side),” “All About the Banjo,” “Run Mississippi” and “Kentucky Borderline,” the combination of energy and agility always remains intact, Spiritual sentiments are never far from the surface either, and the gospel strains of “The Old Rugged Cross” and “You Don’t Love God (If You Don’t Love Your Neighbor)” serve to reinforce the band’s populist precepts. A stirring set of songs served up with seemingly effortless authenticity, All the Rage allows for a bluegrass brew with the deepest hues.