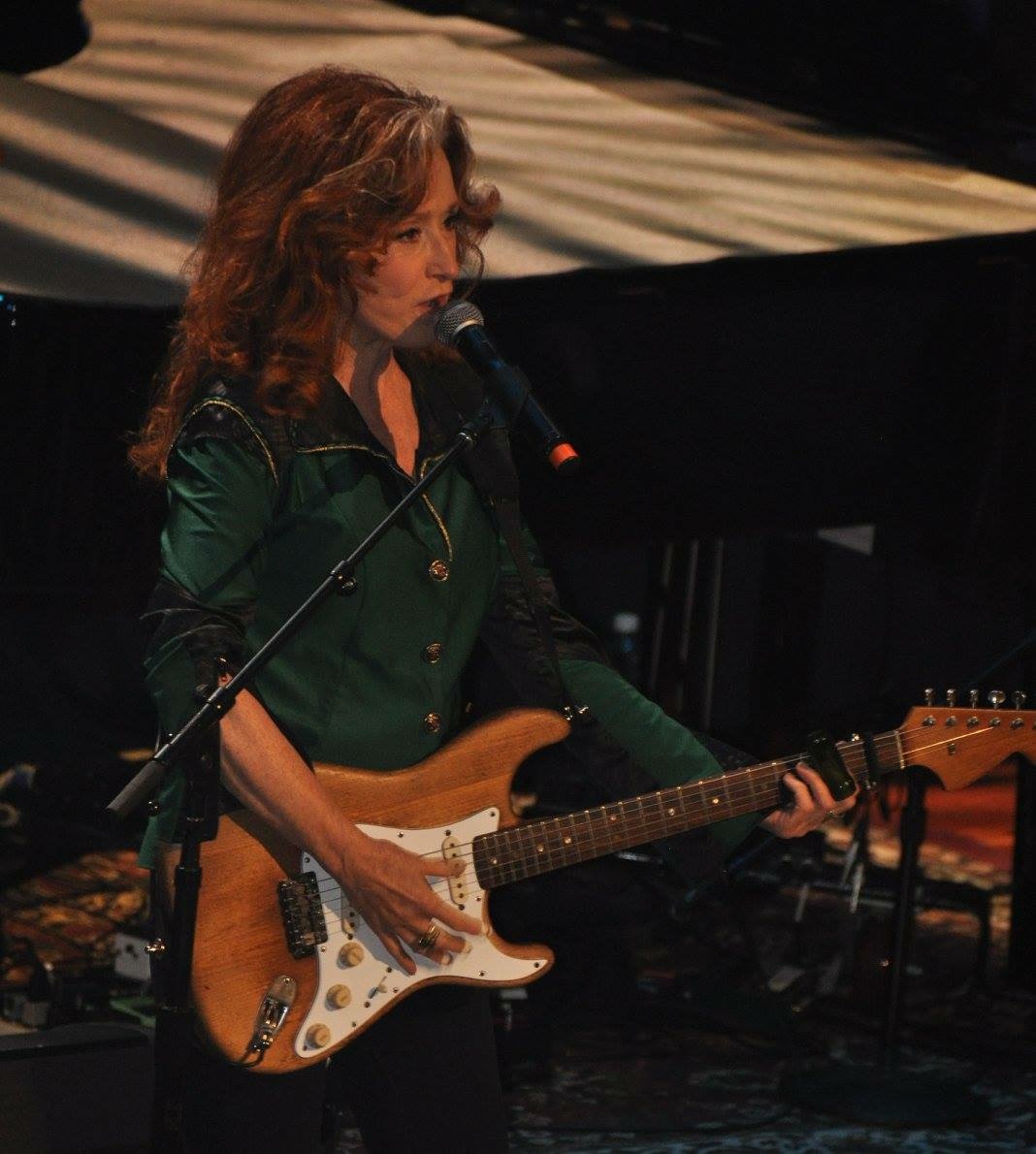 Tennessee Theatre Knoxville, TN- It’s comforting to know that in these troubling times those fans of a certain generation can still find solace in musical heroes that continue to pursue their muse far longer than age ordinarily allows. With Dylan now in his mid seventies, the Stones, Brian Wilson and Paul McCartney rapidly approaching that plateau and Leonard Cohen edging them all out at the age 82, there are no longer any seemingly prescribed limits on how long one’s able to exert maximum effort. It’s nice to know that those who once supplied the soundtrack of our youth are still there to keep the music coming.

By comparison, at the soon to be age of 67, Bonnie Raitt is a relative youngster compared to her older peers, but her willingness to joke about her accumulated years seems, by her own admission, to put her in the category of a senior citizen. Not that she looks the part; svelte, possessing masses of her famously red hair, and able to command a stage with the grace and confidence of someone half her age, she still closely resembles her younger self of 25 years ago. Still, it’s her sentiments that give her away. Performing before a sold-out house at Knoxville’s stately Tennessee Theatre this past Tuesday night, she made every effort to embrace and identify with her ageing audience, one mostly made up those who had reached the same point in their trajectory... still engaged, still active and yet obviously concerned about the consternation and confusion brought on by present circumstances.

While those competing in the current political cycle were never mentioned by name,it was apparent they were never far from her thoughts. “Don’t be discouraged,” she implored the crowd, begging them not to stay home on election day, which happens to fall on her birthday. “I don’t care who gets in,” she said at one point. “We’re going to fix it.”

Exactly what “it” is was never specifically touched on, But Raitt’s empathy for those who were still reeling from one nightmarish episode after another in the continuing drama of this absurd political season was evident. She acted as both cheerleader and chief comforter, veering back and forth from her trademark sassy, soulful rockers to tender ballads that demanded little instrumental accompaniment. Indeed her band -- guitarist George Martinelli, longtime bassist James “Hutch” Hutchinson, drummer Ricky Fataar, and keyboardist Mike Finnegan -- are a formidable bunch, as tight a backing band as any she’s ever had. Their polished presence, fronted by Raitt’s still searing slide guitar, made those famously upbeat songs in her repertoire -- “Thing Called Love,” “Something To Talk About,” “Hear Me Lord,” “Doctor Feelgood,” a Los Lobos cover “Shakin Shakin’ Shakes,” and two of the five songs in the encore, “Roadrunner” and “Bad Case of Lovin’ You” -- sound as effusive as ever. And yet, when Raitt put down her guitar or sat down at the piano, the power in her vocals, particularly on the touching treatments given “I Can’t Make You Love Me” and “Angel From Montgomery” -- easily the two emotional high points of the entire performance -- demonstrated that her emotive singing may well be her single greatest asset, her stunning fretwork aside.

At the end of the evening, Raitt seemed genuinely touched by the crowd’s rapturous reaction, and her continued assertion that the politicos are simply squandering their time in the spotlight was a continuing theme even as the music continued to effectively weave its spell. Raitt’s grace, confidence, humility and credence not only lifted the spirit of all in attendance, but also offered confidence that music’s continuum was still the support that will see us all through.

Support band California Honeydrops kicked off the proceedings and performed their role in more ways than one. The six piece Oakland based band offered up a lively 40 minute set that mixed jazz, rock, soul and funk before loaning its brass section to Bonnie during a couple of rollicking interludes later on. Their energy and exuberance was well received by the audience, making it all too obvious why Raitt tapped them as her warm-up. They set the mood magnificently.