Bun E. Carlos Has a Few Cheap Tricks Up His Sleeve 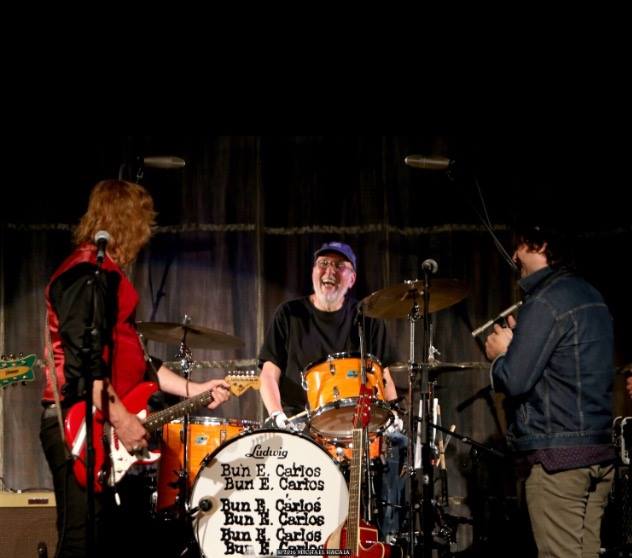 It would be easy for Bun E. Carlos to rest on his laurels. After all, as the long time drummer for Cheap Trick, he helped create the band’s unique stage persona and power their way to spectacular sales numbering in the hundred of millions With his stocky frame draped in a white short sleeved shirt, loosened tie and black-rimmed glasses, Carlos -- or, as he was known at birth, Brad M. Carlson -- looked less like a rock musician and more like a rumpled college professor.

Although Carlos is celebrating the upcoming release of Greetings From Bunezuela!, a new album comprised of classic cover songs and featuring special guests Robert Pollard, Rick Pirner of Soul Asylum, Alejandro Escovedo, Alex Dezen of the Damnwells, it’s certainly not his first venture beyond the realms of Cheap Trick. He’s played with several ensembles over the years, among them, Tinted Windows (also featuring Hanson’s Taylor Hanson, former Smashing Pumpkins guitarist James Iha, and Fountains of Wayne bassist Adam Schlesinger), Candy Golde (with John Stirratt of Wilco, Rick Rizzo of Eleventh Dream Day, Mark Greenburg and Nicholas Tremulis) and, most surprisingly, the band he formed in high school, a combo called The Paegans.

Nevertheless, it’s his tempestuous relationship with his former colleagues that have grabbed the headlines in recent years. In 2013 Carlos sued the other members of Cheap Trick for his share of the band’s royalties after he was tossed from his drum kit in favor of Nielsen’s son Daxx, a scenario that found him a technical member of the partnership but no longer a working member. His three former colleagues -- Nielsen, singer Robin Zander and bassist Tom Petersson countersued, but to no avail. Nevertheless, the band that had become a foremost proponent of American power pop was devoured by its internal schisms and a divisive power struggle that dismayed its fans and altered the brand decisively.

The four musicians reunited, albeit briefly, for this years’s Rock and Roll Hall of Fame induction, an honor that was long overdue, but future prospects for reconciliation seem dim at best.  We spoke to Carlos about these and other matters recently as he prepared for the release of his upcoming album.

The new album shows that you do indeed have a great ear for classic rock and power pop.

I’m a big song fan, especially when it comes to good rock songs, good pop tunes. The guys I got to work with on the record are all good guys. We all shared in the production really. I had a lot of help with the project. I like these songs, we did good versions of them, and I want to show them off to people. That’s why we did the covers record. It’s like a great mix tape.

Share with us the story behind your stage name, Bun E. Carlos?

I was about four years old when my parents got me this book about Paul Bunyan. So everyone would call me “Bunyan,” or “Bun” for short. So when we moved to Philadelphia -- me, Rick, Tom and Stookey from the band the Nazz, everyone started called me “Bunny,” so I thought, okay, I’ll be Bun E., with E. being like a middle initial for my stage name.

So is your name now officially Bun E. Carlos?

No, it’s still Brad Carlson. When I go to the post office they’re surprised that I have two names. And I tell them, yeah I do. One’s a professional name and one’s a legal name. I get checks written to both names and they’re both me.

Tell us about the new album? How did it come to fruition?

We were talking about doing a covers album as far back as the ‘70s, but of course we never got around to it. And when the Hall of Fame called, I decided that was a good time to do it. I work with a couple of different bands. One in Rockford here and one in Chicago, so I figured I could get those guys to play on it. Then it was a matter of calling singers, and the people I called were people that were well represented in my record collection, singers I liked. I started out with Alejandro (Escovedo) and I let him know I wanted to do one of his songs and a Stones song, and he said yes. Then I got hold of Robert Pollard from Guided By Voices. We had worked together around 15 years ago. So it kind of ended up like that.

So the new album will definitely mark a new beginning for you. Is this your new day job going forward?

Right now I’ve got a covers record that I’ve always talked about doing and I finally went out and did one. I produced it and that was something new for me because I had never produced a record before, so we’ll see how it does when it comes out. If something goes great, then yeah, there will definitely be another one and I’ll get a band together to tour. We just have to see how it goes.

Yeah, it came out only as an import. CBS Japan was splitting into two company -- CBS Japan and Sony Japan. So to commemorate this, they asked a bunch of their artists to do live albums. Bob Dylan did a live album, And then they decided Cheap Trick would do a live album, and whatever bands came over, they would do a live in Japan album as well. Initially they wanted a double album, but we told them, no, we don’t have time to mix a double album. So we decided to do a single album because we had a new album coming out in America. It started getting imported to America and then we told them, look, you have to put this out in America. Plus the foreign royalty rate was only about half of what it is in America. So even though it was selling over here, we weren’t making any money on it. So finally they decided to put it out in America and boom, it took off.

Did you have any idea how huge that album would become?

No. It was a big surprise. We put out #Dream Police# before #Budokan# came out and the general plan was to put it out in the spring. But the record company was saying, this is going to be the one that puts you over the top. But of course they said that with every record. In early ’79, we had a tour of Europe and another tour of Japan lined up. We were going to be out of the country for about 60 days. And the record said that when we returned they’d put the #Dream Police# album out, but while we’re gone, they’d release the live record. It had been imported like crazy. But they figured that if they put it out here it would sell 200,000 or 300,00 copies to the Cheap Trick fans because that’s what it was selling here. But back in those days, even 50,000 was a bomb. So when we came back, the record company was telling us, this thing had blown up. We’re going to put a single out and it’s going to be a hit record. And everything changed after that.

You guys got the opportunity to work with the late George Martin. What was that like?

One of the nice parts was that we got to fly down to Montserrat, this beautiful island in the Caribbean. We got to go down there for three weeks and make a record and relax. That was fun. And we got to work with George and Geoff Emerick, the greatest engineer in the world. That was nice too. And we got all our Beatle questions answered. It was lot of fun, one of the highlights of my career.

So what was Sir George like to work with?

He was a real gentleman. I remember asking him, “Can I get my snare drum to sound a little fatter?” and he turned to Geoff Emerick and said, “Bun would like to get his snare drum a little fatter,” and Geoff Emerick walks in and moves the mike a little closer, about two inches. They did a lot of stuff by ear. They didn’t use a lot of toys in the studio. They got the sounds the good old fashion way. It was a real pleasure to work with Sir George, as we would call him.

What was the give and take like? Did you come in with certain ideas, or was he prone to making suggestions?

He came to pre-production in Rockford with me, Rick and Robin, Tom didn’t show up. So George came and asked about the chords and the song structures. And then maybe he’s have a suggestion. He’d say, “I could come up with a good string part for this,” and he did. We would just discuss the song and go back and forth. He took the stuff we did and made it sound great.

It was wonderful to see the band reunite at the Rock and Roll Hall of Fame induction ceremony. So considering all the stuff that had gone down between you, how did you guys pull it off?

Rick had been interviewed and he suggested that maybe there will be two drummers that night, me and his son Daxx who’s working with them now. But the Hall of Fame said, “Don’t bring any extra people to play. We want the four of you guys. We don’t want the extra drummer, we don’t want the keyboard player. We just want the four of you guys up there.” They didn’t want to hear about it. If the original guys aren’t able to do it, they’ll figure something else out like they did with Deep Purple and Chicago. They had guys that had passed on. But with Cheap Trick, the four guys are still around.

So who made the call? Did Rick call and say, “Hey Bun, I hope you’ll be there?”

So when you showed up for the sound check, it had to be a bit awkward, no?

Yeah. A bit. Last time I saw those guys we were in settlement talks as the result of a lawsuit I had filed against them. It was definitely different circumstances.

When you were all on stage and making the acceptance speeches, and then later performing together, it seemed like there was no ill will whatsoever. It seemed very natural.

Well, we have known each other almost 50 years, so when we are in the same room together, everything’s pretty cordial. “Hey, how are you doing? What’s going on?” That kind of stuff. It’s when we’re in different rooms, things change. People came up to me and it was like, “Did you hear what those guys said about you on the radio yesterday? Did you read what they said about you in #Rolling Stone#? It was like, I know. I was getting called names, them saying I was a bad guy or whatever. But face to face, it’s like, “Hey, how’s it going?” It was pretty cordial. My management let them know ahead of time that at the Hall of Fame we should all play nice. We don’t need to air our dirty laundry in front of the whole world or get up there and piss and moan.

How about in private? Did you try and clear the air?

So was there any talk about reuniting as the foursome going forward?

Nah. Daxx, Rick’s kid, has a job. He doesn’t have to support his kid anymore and that’s a good thing. Rick’s a good father. He helps his kids out. And with this youngest one, Daxx, he’s got a good gig now. So Rick’s a happy camper.