For Better, Or Worse by John Prine 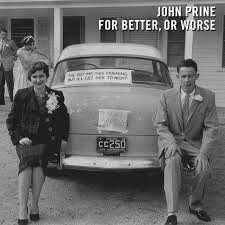 Pardon the pun, but for better or for worse, this new album of all star duets isn’t necessarily prime Prine. His other talents aside, he’s rightly hailed as one of Americana’s greatest living songwriters, and any effort that doesn’t include at least a couple of his compositions may be considered by some a potential disappointment. No matter though; like In Spite Of Ourselves, his last collection of collaborations released in 1999, For Better, Or Worse is a well chosen collection of classic country songs that pairs Prine’s weathered, raspy vocals with those of several A-list artists. This time around, the roster has changed almost entirely, with Fiona Prine (natch) and Iris DeMent the only returnees. Fortunately, his new recruits -- Lee Ann Womack, Alison Krauss, Susan Tedeschi, Kacey Musgraves, Amanda Shires, and Kathy Mattea ensure that the quality control remains intact.

Ultimately, it matters little where or when these songs originated. Prine and his partners wrap the material in suitably down home trappings that not only add to the authenticity but also make each number sound like an archival recording. Prine may not have authored these standards, but the treatment he and his partners provide allow them to make each their own. Theres an unassuming charm reflected in these sweet sentiments, no matter whether it’s purveyed in the unabashed nostalgia of sweetheart songs like “Falling In Love Again” and “Look at Us,” the saucy cynicism of “Mental Cruelty” or the remorseful refrains that echo throughout “Cold, Cold Heart” and “Fifteen Years Ago.” The sentiments are conveyed with sincerity and their charms are all too obvious.

At this stage in his career, it’s hardly surprising that Prine would opt for a backwoods glance and indeed, the fact that he can cover these standards with such credibility and convictions speaks to his standing as a true American master. For Better, Or Worse is, its titled aside, an excellent Prine offering.