Leap of Faith by Timothy B. Schmit 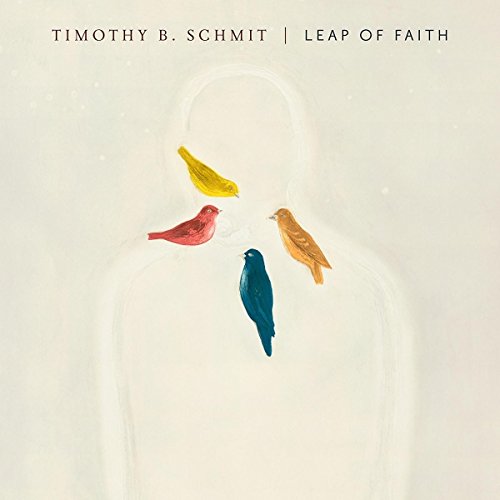 If Timothy B. Schmit was any more prolific, then Webster’s Dictionary would have to come up with an entirely new word to describe his remarkable work ethic. The most important shift in Schmit’s career began with Poco, and later of course, the Eagles. With both bands, Schmit was able to make his presence known immediately. He contributed the song “Keep On Trying” to Poco, and later helped propel the mega hit “I Can’t Tell You Why” to the top of the charts for the Eagles. He continued to play an integral role in the Eagles until their initial break-up in 1980 and subsequently rejoined them when they reconvened again in 1994.
Still, those two groups represented only part of his trajectory. Schmit’s session work has occupied a significant portion of his career, although his individual efforts are in surprisingly relatively short supply. In a career that spans some 50 years, he’s only released six solo albums, including his latest, Leap Of Faith, his first offering in almost seven years. Not surprisingly, there’s a distinct sense of familiarity and recognition underpinning this material, from the harmonious lilt and breezy vibe of songs such as “My Hat,” “Goodbye My Love” and “You Are So Wild,” all of which would have fit well on any of those early Poco albums, to the lovely solitary ballad “It’s Alright,” the rustic ramble “Red Dirt Road” and the sublime Beach Boys-like vibe of “The Island,” which, appropriately enough, features the combined voices of Al Jardine’s offspring Matt and Adam. Indeed, the record features a number of cool cameos -- Benmont Tench, Van Dyke Parks and Gary Burton among them.

Schmit says Leap of Faith is a very personal record, one filled with reflections about life, love and everyday circumstance. “Life in motion, but I can’t say it’s good/And I keep pushing, though a voice inside me says that I should,” he sings on “Slow Down,” a song that hints at the struggle between complacency and confidence. Regardless, this is an exceptional album, perhaps the best individual effort he’s ever offered. In a sense, Leap of Faith reflects both solace and strength.