Montreal Celebrates All That Jazz 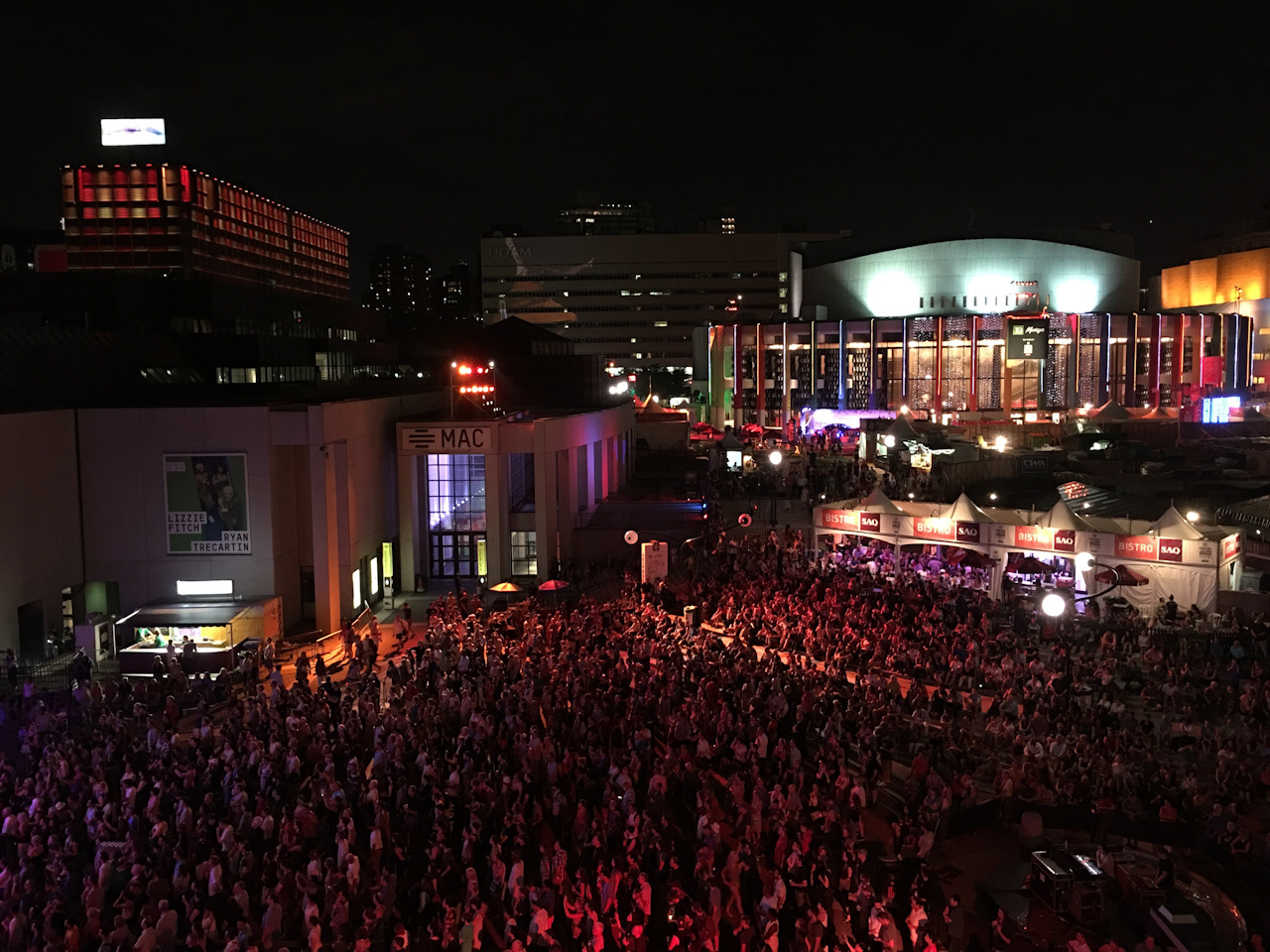 Montreal makes a daunting first impression. Travellers arriving by air first find themselves in Montreal’s cavernous airport, where the walk to customs takes in countless levels of concrete passageways and enough of a traipse to make one believe he or she will be halfway to the city center by the time it’s done.

Freed from the airport’s confines, the trip to the city offers the over developed landscape common to any American metropolis. Endless highways slice through an endless sprawl of homes, businesses and nondescript industrial terrain, stretching mile after mile until they reach the city limits and then the inner city beyond. Our driver complains that the government’s recent efforts to rebuild the roadway system in a way that will somehow better the commute has only resulted in traffic that’s constantly snarled and a tangle of unfinished bridges and parched pavement that offer no respite.

Happily, this momentary distraction ultimately gives way to a city that’s as modern and beautiful as its reputation insists, an especially impressive feat considering its origins stretch back nearly five centuries. At first glimpse, it resembles an unlikely hybrid of New York and Seattle, the former due to its endless array of hotels, offices, eateries and commercial buildings, the latter because many of its streets are on a slight tilt -- not as steep as San Francisco perhaps, but just enough to suggest a kind of west coast topography. Of course, Montreal is not a western city. It lies within hugging distance of Vermont and just west of Maine, making it Canada’s most accessible major destination within reach of the U.S. north and east coast.

Discovered by the French explorer Jacques Cartier in 1535, Montreal was already a thriving beacon of activity once he arrived, thanks to the fact that native people had been occupying it for some 4,000 years. Located on the island of Montreal, it ranks as the most populous city in its home province of Quebec, as well as the second largest city in all of Canada as a whole. Originally dubbed Ville-Marie (“City of Mary”), it had its name changed later to reference Mount Royal, the triple peaked hill that lies at the city’s center and now accounts for the change in grade from one area to another.

Still, the most immediate impression Montreal shares with its visitors is the city’s remarkable cultural disparity. While French is the primary language -- often leaving those who are less than multi-lingual perplexed when it comes to certain menu selections that are in desperate need of translation -- its population of 1,650,000 also includes a substantial number of residents of Asian and Far Eastern descent. The Old City, with its array of Parisian type shops, cafes, cathedrals (including stately Notre Dame) and imposing government buildings lies only blocks away from the thriving Chinatown, which boasts shop after shop filled with seemingly unlimited quantities of inexpensive imports such as clothing, games, toys and paper products that range for light fixtures and fans to playing cards and other cheap knick-knacks. The neighborhood also seems to attract the rougher elements of the city’s population; on the day we were there, we spied several unruly ruffians with hostile attitudes encamped on the street, giving a nearby shop owner concern for the goods he had displayed outside his door.

Typical crowd watching music on an outdoor stage at night during the Montreal Jazz Fest.

Inside of Montreal's Notre-Dame Basilica Cathedral.

Group of Turkish dancers, one of the Festival's many free outdoor attractions.

Nevertheless, for those on a budget or simply unwilling to venture across an ocean, Montreal is quite a lot like Paris, an old world city that lies within easy reach of home. In the Old City especially, there are enough outdoor cafes with continental cuisine and examples of ancient architecture coexisting with modern art and attitude to purvey a distinctive European aura.

Our visit to the city in early July found Montreal mostly about the music. The annual Montreal Jazz Festival was taking place just beyond the doors of our hotel, spread leisurely along a spacious pedestrian mall. For said pedestrians, it’s ideal, with walks between the various venues taking no more than a matter of minutes. In fact, Montreal literally seems to embrace its namesake festival, not only because it hosts it in the city center but because it’s a beacon for international tourism. After 37 years, it ranks with Montreux, Newport and New Orleans as one of the most venerable musical gatherings in the world, and its accessibility to both Europe and the U.S. makes it a magnet for music lovers both near and far. Indeed, there were some evenings where we found ourselves strolling through the crowds and swearing that a good percentage of those aforementioned aficionados were staking a claim to the sidewalks along with us.That meant that with a multitude of free outdoor concerts -- a decided plus for a festival of this size -- early arrival was necessary to get a good glimpses of the stage.

Naturally, the festival’s main draw is its headliners. Those artists were found performing in either the sprawling performing arts center -- a combination of three world-class concert halls (Salle Wilfrid-Pelletier, Maison Symphonique De Montreal and Theatre Maisonneuve) -- or the array of clubs and cabarets that dot the festival’s periphery. The bigger concerts were ticketed events asking varying costs for admission, but the array of headliners -- from tradition jazz staples like Wynton Marsalis, Chuck Corea and Marcus Miller to a seemingly unlikely blend of progressive rock and pop encompassing both the old (Brian Wilson, Kool & the Gang, Joe Jackson, Oasis’ Noel Gallagher) and the new (Boy & Bear, Lord Huron, The Tallest Man On Earth) -- made for some remarkably varied options. There were also those artists that fit somewhere in-between -- soul singer Lauryn Hill, ukulele virtuoso Jake Shimabukuro, bassist Tal Wilkenfeld, jazz/pop hybrid Squirrel Nut Zippers, the folkie Wainwright Sisters, and arched crooner Rufus Wainwright, among them -- performers whose attempts to bridge that divide were clearly welcomed as well.

Consequently, over the course of ten days, attendees can get an entertaining lesson in a wide range of musical invention, as well as a sense of this spectacular city, each of which find a common bond with tradition while also looking ahead towards the future. Or, as Joe Jackson noted during his performance, Montreal isn’t all about jazz anymore. Like the city itself, it gains distinction through diversity.