Critically acclaimed, singer/songwriter/multi-instrumentalist Richard X. Heyman has just kicked off a Kickstarter campaign to finance the release of Incognito, his latest 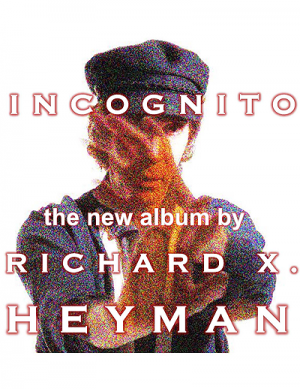 album of hyper-tuneful, guitar-driven originals. Join the Campaign at:  https://www.kickstarter.com/projects/1093468908/incognito-richard-x-heymans-new-album .

RXH is known nationally as a world class drummer, who’s rocked recordings and live performances with music luminaries such as Brian Wilson, Link Wray, Jonathan Richman, Michael Brown (The Left Banke) and Mark Lindsey (Paul Revere & The Raiders), among others, as well as a guitarist and keyboardist for Peter Noone (Herman's Hermits), Mary Weiss (The Shangri-Las) and Ben E. King. In addition, he still plays live and records with the band he founded in the ‘60’s, Little Steven’s Underground Garage favorites The Doughboys.

It was only natural then that the sessions for Incognito started with Richard laying down over 20 high energy drum tracks on a vintage Rogers kit at East Side Sound on New York City’s Lower East Side. He then proceeded to add layer upon layer of ringing guitar and propulsive keyboards with Nancy Leigh engineering. Leigh also contributed inventive bass and provides harmony vocals. Julia Kent performed beautiful cello tracks on several tunes and Susan Mitchell contributed some lively violin.

However, first and foremost, Incognito revolves around RXH’s emotionally moving, sumptuously melodious songwriting, which provides the ideal vehicle for his powerfully soulful singing.

The Incognito album release will contain 14 songs.  The remaining material will be available exclusively as bonus tracks to Kickstarter supporters.  Some of the other bonuses offered will be t-shirts, jackets and of course autographed copies of the album.

Says Richard of this latest musical foray, “You may ask why, why do I keep recording and releasing new albums – CDs, no less?  When all the conventional wisdomers warn that people don’t have the patience or attention span that they used to, to digest an entire album with all the competing media and technologies.  Well I suppose I could make the argument that old habits die hard or you can’t teach an old hound like me new tracks.  But I also think about the absurdity of trying to convince a novelist that he or she should only write short stories or a single chapter because their readers don’t have the time or inclination to wade through their antiquated novel.  But most of all, I'm very exited about this batch of new songs and the way they hang together as a full length album.”

Richard was one of the first “one man band” recording artists, following in the grand tradition of Paul McCartney, Emitt Rhodes and Todd Rundgren. His abilities have won him a fiercely loyal grass-roots fan base and reams of acclaim over the past two and a half decades. Critical praise began with the release of Richard’s first album Living Room!! which Rolling Stone magazine proclaimed “an undiscovered treasure.” All Music Guide called him “perhaps America’s greatest unsung hero of power pop, a songwriter of uncommon talent and intelligence and a one-man rock band without peer,” while the Hartford Courant proclaimed him to be “a true heir to [Brian] Wilson’s mantle, amid an ocean of pretenders.” The Chicago Tribune observed, “Heyman creates something fresh from his influences rather than parroting them.” As Rolling Stone then-editor David Wild put it, “rock’n’roll doesn’t get any better than this.”

The lifelong passion for music is what’s driven Richard since his days growing up in Plainfield, New Jersey. He began playing drums at the age of seven, and was proficient on guitar and piano by his teens. By then, he had already begun writing songs. He has developed a versatile singing voice, which can range from sweet crooning balladeering to balls-to-the-wall rock’n’roll wailing.

Richard was still in junior high school when he achieved his first taste of rock ’n’ roll notoriety as drummer with fabled garage band The Doughboys, whose raucous live sets won them a rabid following in the New York/New Jersey area during the second half of the 1960s. The Doughboys recorded a pair of singles for the Bell label, made multiple appearances on the local TV show Disc-O-Teen (emceed by legendary horror-show host Zacherle), shared stages with the likes of the Beach Boys, the Buckinghams, Neil Diamond and the Syndicate of Sound, and served as the house band at the Café Wha? in Greenwich Village during the summer of 1968.

By the time RXH reemerged as a solo artist in the late 1980s, he’d matured into a singularly distinctive songwriter with an uncanny ability to channel his vintage rock ’n’ roll influences into tunes that are both infectiously catchy and emotionally resonant. Those qualities were prominent on his self-released, home-recorded efforts Actual Size and Living Room!! Both generated considerable critical positive press and music-industry word of mouth, leading to a major-label deal with Cypress/A&M for the re-release of Living Room!! and then with Sire/Warner Bros., which released the widely acclaimed Hey Man! in 1991.

In recent years, RXH has juggled his own work with his activities as a member of the reactivated Doughboys, who first reunited in 2000 and have remained active ever since. The resurgent quartet has also released a series of well-received new albums including 2007’s Is It Now?, 2010’s Act Your Rage, 2012’s Shakin’ Our Souls and 2014's Hot Beat Stew which have generated seven "coolest songs in the world" on Little Steven's Underground Garage.

Get ready to lose yourself in the wealth of fantastic new Heyman songs on Incognito!