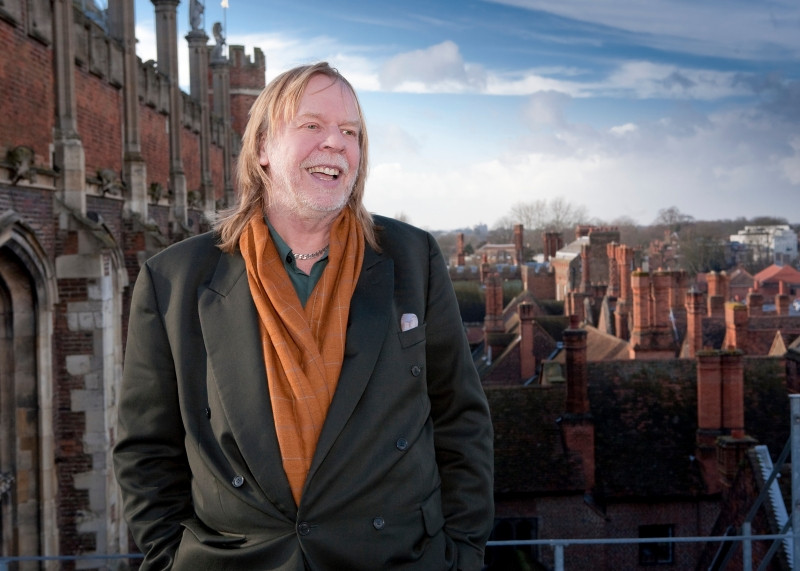 It’s just after 10 a.m. and Rick Wakeman’s up early, especially by rock star standards. Then again, he’s got a new project to promote, a Yes reunion of sorts that finds him working again with two musicians who, like him, have played important roles in that iconic outfit over the band’s 48 year run -- singer Jon Anderson and guitarist Trevor Rabin. Not that Wakeman’s new to this routine; his list of credits include stints with David Bowie, the British band Strawbs, a myriad of guest appearances and solo recordings, and a secondary career as a TV and radio host in his native U.K. Indeed, his keyboard skills have kept in high demand for more than five decades. And when you’re that busy, there’s no time to waste lying in bed, even if you did just fly across the ocean the night before.

“I’m an early riser anyway,” the 67 year old musician insists. “When I’m home, I’m usually up and about around six a.m. We have rescue cats, and when they’re hungry, they don’t care if you’re asleep. I’m also dealing with a five hour time change. So when it’s four in the morning over here, you tend to go, ‘Hello, I’m wide awake.’ I’m not great with jet lag but we have a few days to sort it all out.”

Cheery and amiable, despite problems with his hotel phone (“They moved me to another room just to take the phone call. It’s been real fun and games.”), Wakeman is all too eager to discuss his high profile project, conveniently dubbed ARW (thankfully chosen to avoid a law firm-like “Anderson, Rabin and Wakeman.”) After a week or two of rehearsals, the trio’s tour, with bassist Lee Pomeroy and drummer Louis Molino III in tow, will commence on October 4th in Orlando and run all the way through spring 2017. Wakeman says the seeds for the project were planted nearly a dozen years ago, in 2005 to be precise. He and Anderson had just completed one phase of a tour with the other members of Yes, but when Anderson became ill and required rest, the band’s other members -- guitarist Steve Howe, their late bassist Chris Squire and drummer Alan White -- insisted on continuing with an Anderson’s replacement. “I told them that I didn’t want to carry on without Jon,” Wakeman recalls. “I felt that Jon was an integral part of that band. There are certain bands that if you take away the singer, you’ve lost a key element of the band. I can’t imagine the Who without Roger Daltrey or Led Zeppelin without Robert Plant. So I said, no, I won’t do that. They went off and did their thing, which was fine. But once Jon got his health back, we went out and did a duo album called The Living Tree, two tours in England and one in America.”

Inevitably, that pairing inspired thought about further possibilities “We talked about what we’d like to do next, and we felt that the next phase would be to have a band playing Yes music the way we wanted to play it. And there was only one person we wanted to be part of that, and that was Trevor. When Jon spoke to him, he was well up for the idea. The major difficulty is that Trevor was unbelievably busy and Jon’s unbelievably busy and I’m unbelievably busy. So we realized we’d have to clear the decks in order to find the time to do this. The catalyst came when Chris Squire died and our own mortality hit everybody. We said, if we don’t do this now, who knows when we’ll get the chance to do it.”

The usual reunion tradition would have the trio would record a new album, but Wakeman insists that wasn’t part of the plan, at least for now. “We thought that would absolutely be the wrong thing to do, because that looks like we’re just doing it for the money, which is not the case,” he insists. “To be honest, we could each earn more with our own solo stuff. This is a real labor of love. However, we have been sending some ideas back and forth, and those can only develop further as we get to know each other more.”

Naturally, ARW performances will fill them tapping into the Yes catalog. “We’ll play around within those songs to add some bits and pieces to make them sound really fresh,” Wakeman predicts. “That idea seems to be working really, really well.”

Of course, there is a version of Yes that’s still working on the road, and while Howe and White are committed to performing under the Yes banner, Wakeman says that ARW claim its rights to the music as well, “This was something we felt we had to do for our own sanity really, as much as for anyone else,” Wakeman admits. “We believe that our contributions to Yes’ music haven’t come to an end. That’s one reason why we’re doing this.”

When asked if the two bands are competing against one another, Wakeman maintains that couldn’t be further from the truth. “This is definitely not a battle of the bands,” he says. “Whatever Steve and Alan want to do is absolutely fine, and we wish them well. But it’s far removed from what we’re doing.” If that seems a bit contradictory, there’s a good reason why. “Yes music has always broken a lot of rules,” he muses. “It’s not like anything else. It’s always had interesting character on board. It’s always been very opinionated. It’s strength is that the musicians are fans as well. I’ve always been outspoken about the early Yes music, including the stuff I was on. When people ask me how I could say that, I tell them I’m also a fan. If you’re a fan, you can also be an individual with an opinion, as well as part of the band. Yes music is ingrained in us and always will be.”