Still Testifying by My Darling Clementine 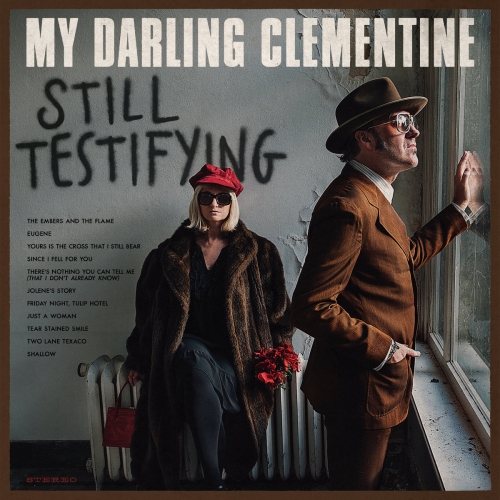 At first, Michael Weston King’s decision to team up with his wife, singer Lou Dalgeish, in a duo dubbed My Darling Clementine made for an amusing invention. She played the jilted bride and he, the fickle suitor who played off her ruin and resentment. Given the serious nature of his earlier work at the helm of the Good Sons, as well as his collaborations with Chris Hillman, Ron Sexsmith and the late Townes Van Zandt -- not to mention an entire album of protest tunes reworked in the Greenwich Village tradition -- the pairing seemed strangely at odds with those earlier intents. It was a nice novelty perhaps, but at best it good for only a limited run.

So it came as a bit of a surprise when the pair persisted in pursuing their new guise, turning it into a full time occupation that’s reaped them both notice and notoriety. Where once it played out like a spoof, with a nod and a wink besides, the duo are now downplaying the humor and proving to the naysayers there’s no more joking around. The main thing that works in their favor are the songs themselves. It’s not hard to imagine Johnny and June, George and Tammy or Gram and Emmylou sharing their misery on songs like “Eugene,” “Yours Is the Cross I Still Bear,” “Since I Fell For You,” or, in fact, every entry the album has to offer. There’s no snickering, only sentiment, and the interplay between doubt and devotion suggests that the satire’s been left behind and genuine emotion added in its place.

Still Testifying is an apt title then, an indication that the humor and hubris is no longer a main concern. Consider their conviction and credibility the order of the day.