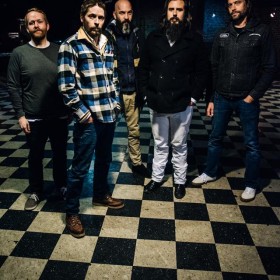 Judging by the solemn faces and the weathered expressions of the foursome that grace the cover of their eponymous debut, the Deadmen don’t exactly express the fresh and vibrant look of some fresh faced newcomers proudly sharing their collective debut. Then again, with a name like the Deadmen, a giddy perspective might not be in order. Truth be told, at least two of the four - Justin Jones and Josh Read - are veteran troubadours and their earlier experiences are firmly etched in this new communal combine. The songs they sing are of a decidedly hardbitten variety - rugged, resilient, tense and tempestuous. It’s not exactly easy listening, but it’s a compelling sound all the same.

If the Deadmen have had a hard time of it up until now - as the sound of this record appears to attest - it’s unlikely they’re going to sugarcoat the details to win an instant embrace. Songs build to a feverish pitch and even a track that starts out with some measure of tranquility (take “55 Days” as one of the more obvious examples) doesn’t remain that way for very long. For every measure of repose, there’s an equal dose of edgier intent. Indeed, desperation and despair clearly lie just below the surface. Those sentiments are best illustrated on the staunch and sturdy “Shared Moment Downtown,” in which the protagonist is dryly described as a man “45 looking 63.”

Still, the Deadmen’s environs are bleak but not barren. Hope resides there somewhere, but its whereabouts aren’t readily apparent either. Like a gunslinger prepped for his final showdown, the Deadmen are determined to go down fighting. Both harrowing and haunting, “The Deadmen” tells some desperate tales.