Warren Haynes - A Journeyman Musician Tours in Tribute to the Band

Referring to guitarist, vocalist, musical arranger and bandleader Warren Haynes as a journeyman musician is kind of skin to making note of of the fact that it often snows in the arctic. In other words, it's simply stating the obvious. While his day job with Gov’t mule and ongoing efforts under his own auspices are the essence of his day job, he's also the go-to guy for any number of established outfits, whether it’s the Allman Brothers Band, the Dead, Phil Lesh and Friends or any other ensemble inclined to call in need of his services. 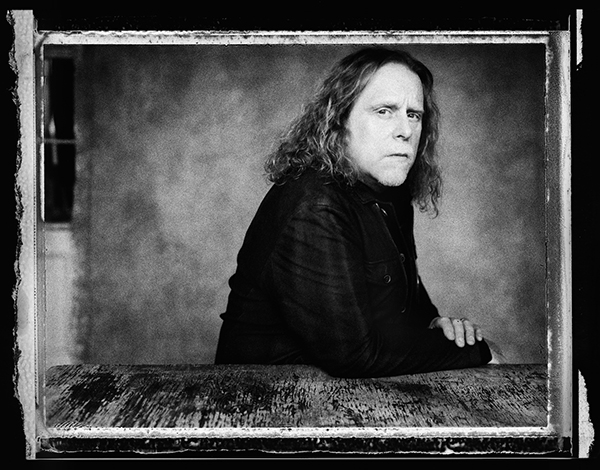 Although he began playing professionally with David Allan Coe at the age of 20 and with the band the Nighthawks shortly thereafter, Haynes’ career took off in ernest when he joined the Dickey Betts band at the end of the ‘80s and became fully entrenched in the Allman Brothers’ orbit. A co-writing credit with Garth Brooks on the song “Two of a Kind, Workin’ on a Full House” further affirmed his varied skill set when it took him to the top of the country charts for a 20 week run.

The Allmans have brought him steady work ever since, spinning off his trademark outfit Gov’t Mule, originally a side project that also included the late Allman Brothers bassist Allen Woody. Ever the multi-tasker, Haynes simultaneously launched a solo career in the mid-‘90s, one that still flourishes up through the present day. Still, that hasn’t stopped him from sitting in with others whenever the opportunity arises. Aside from ongoing work with the Allmans and the Dead -- with whom he’s played since the late ‘90s -- and the Dave Matthews Band, he also plays in various permutations of his solo projects and headlines his annual Warren Haynes Christmas Jam which takes place over the holidays in his hometown.

Haynes’ latest project, “The Last Waltz 40 Tour: A Celebration of the 40th Anniversary of The Last Waltz,” is no less ambitious. Organized under the auspices of Blackbird Presents and producer Keith Wortman, the idea originated with a two-night, sold-out concert event entitled “Last Waltz New Orleans: A Celebration of the 40th Anniversary of The Last Waltz,” which took place during Jazz Fest 2016 at New Orleans’ historic Saenger Theatre. Haynes and producer/bassist Don Was served as musical directors of the all-star ensemble which included Michael McDonald, Jamey Johnson, John Medeski, and Terence Higgins of the Dirty Dozen Brass Band. The tour kicks off January 21 at the Hard Rock Casino in Hollywood, Florida and will continue through February, stopping at several major cities along the way.

Lee recently spoke with Haynes on the phone from his home in Asheville North Carolina and spoke with him about the tour, his frenzied schedule and his remarkable abilities as an unflappable multi-tasker.

How did this project come about? And how did you get involved?

I’ve done several of these tribute shows for Blackbird Presents. The first one was for Levon (Helm). Then I did one for Greg Allman, followed by one I did one for Dr. John and one I did for Lynyrd Skynyrd. Don Was and I are friends, and I’ve become friends with Keith Workman who is the producer of the shows. Don and I were friends prior, and then I discovered he was the musical director for a lot of these shows and we started talking about doing one together. So they called me in November of 2015 and asked me about doing “The Last Waltz” concert in New Orleans. I was intrigued about the idea, so the first thing we talked about was who the singers would be. And they turned out to be myself, Mike McDonald and Jamie Johnson. Everybody loved the idea. So then we started talking about who the band might be and it all came together very quickly. We invited a lot of guests, some of whom were New Orleans staples. The whole thing was supposed to be a one off show, and then everybody started saying we ought to take this on the road and it became a bigger project.

Was it a problem trying to coordinate the time commitments? You tour a lot on your own and with your various bands. How did you manage that?

It’s definitely been a chore dealing with everybody’s schedules, but when something is worth doing it’s definitely worth trying to make it work. We just decided to pound it out and see what we came up with and I’m really glad that it worked out. I think it’s going to be a blast.

Had you mostly worked with these musicians before?

The only one I hadn’t worked with was Jamey Johnson. I’ve worked a lot with Medescki and a lot in the last few years with Don Was. Terrence Higgins was the drummer in my band after I released the Man in Motion album and toured behind that. I worked with the horn guys off and on through the years. It didn’t take a ton of rehearsal. Everybody showed up prepared, we rehearsed a few days and that was that.

How familiar was everybody with the material?

In varying degrees, everybody was familiar with the songs. But everybody had plenty of time to live with the music. We decided on the song selection well in advance. We couldn’t possibly tackle the whole show because the original show was so long. When everyone showed up the first day of rehearsal everyone showed up prepared and it just clicked.

Are the majority of the songs primarily Band material?

It’s mostly Band stuff. But I did “Caravan” by Van Morrison. We did a version of “I Shall Be Released” that was similar to the Band’s but also kind of different. There were a lot of cool covers. Dave Malone did “This Wheel’s On Fire,” which is a Band song but we had a special guest vocalist doing it. We approached it differently from song to song.

What did The Last Waltz and the Band’s music mean to you as an individual? Was that an influence on you early on? Did it make a big impact on you musically?

When I was a kid, everybody had The Last Waltz triple album in their collection. They were mostly people my brother’s age, older than me because I had two older brothers. One was three years older, one was five years older. So everybody we hung out with had The Last Waltz album. So we would hear it a lot long before I ever saw the movie, and when I finally saw the movie it was so intense to have all those people in one place that were all connected to the Band’s music. I think that music is more important now to me and to a lot of people more now than it was then.

You’re the epitome of a journeyman musician. You’ve been a part of so many great bands, be it your solo material, the music you make with Gov’t Mule, and of course the ongoing role you’ve played with the Dead and the Allman Brothers Band. You could have done tributes connected with those bands and their classic albums.

This opportunity came up because it was the 40th anniversary of The Last Waltz and it was something we were all excited about doing. The one-off version exceeded our expectations and we decided to keep it going a bit longer. I’m very excited it’s going to happen, and of course I was very close to Levon the last 15 years of his life and I really loved him and loved playing music with him as much as possible. We celebrated his 70th birthday with him at Mountain Jam a few years back and we had a lot of guests join us for that. It just feels right. I just feels natural.

Speaking of which, can you give us some idea of what you have on your slate for the coming months and the new year?

We’re just wrapping up a new Govt. Mule album, which, if all goes well, we’ll have out sometime in May. So once that’s out, we’ll be touring with Govt. Mule for the next year, year and a half or so. We’ll be going to Europe and Japan and all over the world to spread the word. Of course, there’s always other projects going on, but that will be the main focus for me from that time forward.

Are you ever home?

These days it’s either work or family, and those are the two things I focus on. When I’m not working, I’m home with family and I don’t really have a lot going on beyond that.

It seems like you would have to set aside time to be with the family because you tour so much. It must be a challenge.

It’s a challenge but I’ve gotten better and better with dealing with it through the years. I have a five year old son now, and when he was born we started looking at ways to keep me home more and gradually my schedule will slow down more. But as long as things are exciting and pertinent, I really enjoy my work and I feel fortunate to be able to do it.